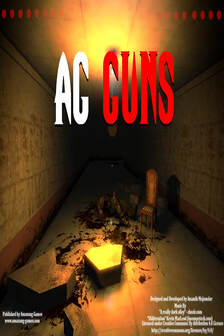 All Orders are processed through the secured BMT Micro services.
AG Guns is a 3D Horror themed First Person Zombie Shooter game where the people of Retton State got infected by 'R' virus, turning them into mindless zombies..
You play as Steve Walker, the army general of Retton State, and you have to deal with the current situation of the state. It has been reported that due to the accidental leakage of the very dangerous virus called 'R' virus from the lab which is spreading throughout the state infecting millions of people, they have become mindless zombies who wants to feed on others and infecting them too. But you are somehow immune to the virus and you are the only one who can save the state. Until an antidote is available you have to kill as many zombies as you can in order protect the remaining population of the state. However, it is easier said than done.

The only one who can save them is you! Are you ready to eliminate the zombies? Let's go!.