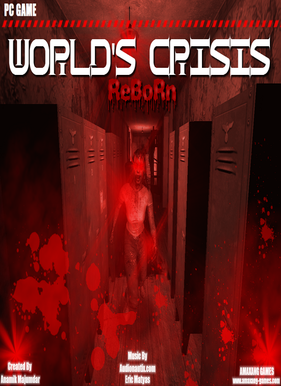 All Orders are processed through BMT Micro payment processing system.

World's Crisis Reborn is a First Person Shooter game based on Horror-Action genres. It allows the player to explore various places, secret rooms, rushing through creepy dungeons and experiencing the terror.
World's Crisis - Reborn is a Horror-Action First Person Shooter game where Anderson, the chief and most experienced Member of WC Army has been commanded by its head, Mr. Aryan, to look into the matter of YWTD Terrorist group. According to the official report, these Terrorists have crept into some old mansion and hotels of the city of Opera. The Police forces were still investigating the places in search of some evidences. But these Terrorists were found to be too cunning and they have plotted the plan in such a way, that, not even Police forces were enough to deal with it. Moreover, some shocking news have cropped up in Newspapers and TV News channels that some places where they might have been hiding are haunted and it was seemed to be the part of their plan. The head of YWTD was Yedner, who have decided to create his own control rooms to conduct a secret project by hiring some scientists. Yedner also had a middleman, named as Jason, through which he was conducting the misdeeds. The people were very much tormented and some of them committed suicide out of fear. But there was only a person who would be able to stop these offensive activities, who is regarded as the HERO of Opera city, Anderson. The Head of WC Army Forces, Mr Aryan, said, " I am glad to put this responsibility on Mr. Anderson, who agreed to take action against the YWTD terrorists. I have entrusted him, since he is one of the member of "BEST OF 5 SOLDIERS" and has special weapons based on Modern Technology. This battle could be very difficult but I am very positive about his ability and I am sure he will be able to succeed!" Mr. Aryan's proposal spread like wild fire throughout the city and the Terrorists have started to capture different places of the city out of anger. Anderson initiates his journey from the haunted house where the terrorists are hiding. SOMETHING WILL HAPPEN! SOMETHING MUST HAPPEN! THIS IS WORLD'S CRISIS : ReBoRn............

In the end it was found that Yedner had escaped Mr. Jason's office and Anderson could not catch him. Will Anderson be able to locate Yedner's current location? Maybe.....